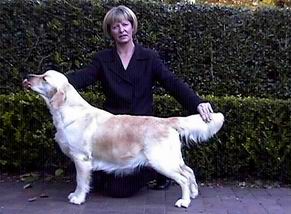 Charlotte has now won her class at every Specialty show she has entered since Baby Puppy 6 years ago, including 4 CC’s and one ResCC quite an astounding acheivement.

Charlotte is co-owned by Kim Handley and Jenny McDonald

Click back on your browser to see more of our Dogs.